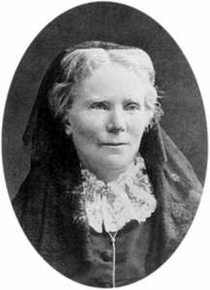 The first woman to be accepted by the register of the General Medical Council, and also the first woman to receive a medical degree in the United States. Born in Bristol, her family emigrated to the U.S.A. in 1832. After many unsuccessful attempts to get into medical school, she eventually graduated in 1849, first in her class of 150 students.

She travelled to Europe, where she was admitted to La Maternité in Paris, and St Bartholomew's Hospital in London. Back in America, she established the New York Infirmary for Indigent Women and Children. 1868 she returned to Britain and lived in London. 1875-7 she lectured on genecology at the London School of Medicine for Women.

Moved to Hastings in 1879 where she campaigned for women's education and suffrage. Died  at home there in Rock House, Exmouth Place. Buried in Scotland. Hastings Women's History has a good page about her. She figures on the Wikipedia page listing the first women in various medical contexts.

She had a strong personality, and could be quite acerbic about others in her profession, generally women, and Florence Nightingale in particular.

This section lists the memorials where the subject on this page is commemorated:
Elizabeth Blackwell

A community centre in the Borough of Lewisham, It contains a large swimming p...