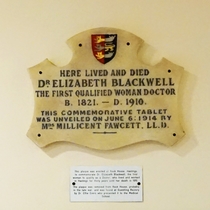 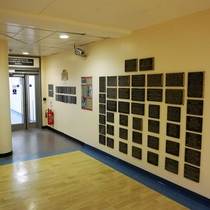 {Small plaque:}
This plaque was erected at Rock House Hastings to commemorate Dr Elizabeth Blackwell the first woman to qualify as a doctor, who lived and worked in Hastings for thirty years until her death in 1910.
The plaque was removed from Rock House, probably in the late war, and was found at Guestling Rectory by Dr Effie Evers who presented it to the medical school.

On their excellent page about Blackwell Hastings Women's History have a paragraph about two Hastings plaques for Blackwell, one still on her house in Hastings and this one:

"In 1914, when Hastings held a Pageant of Heroes, a long procession of girls and women marched to Rock House, where suffragist leader Millicent Garrett Fawcett unveiled a memorial plaque. In 1952 Dr. Effie Evers, wife of the rector of Guestling {about 5 miles to the north east of Hastings}, upturned a white marble slab that lay in her pantry, which had been used for years for rolling out pastry, and discovered it was a commemorative tablet inscribed to Elizabeth Blackwell, with just the barest information and the Hastings Coat of Arms. The riddle of how and why it came to be there is, as yet, unsolved. One possibility is that it was created by a stonemason's apprentice as a training project. The Guestling Tablet, as it was known, was donated to the Royal Free Hospital in London where in 1953 it was set into the archway to the dean's office."

Both plaques are written to be placed on (the rather stunning) Rock House and to be unveiled by Fawcett. It does seem unlikely that they were both erected so the guess about this one being an apprentice piece could be right, or perhaps this one was created and then it became apparent that the site would be exterior and that a more robust tablet was required.

The choice of the Royal Free to hold the plaque was appropriate. 1875-7 Blackwell lectured on genecology at the London School of Medicine for Women, which later merged with the Royal Free.

The plaque for Elizabeth Blackwell is alongside an information panel, and over fifty plaques commemorating former students at the Royal Free Hospital.

This section lists the subjects commemorated on the memorial on this page:
Elizabeth Blackwell

The first woman to be accepted by the register of the General Medical Council...

This section lists the subjects who helped to create/erect the memorial on this page:
Elizabeth Blackwell

This section lists the other memorials at the same location as the memorial on this page:
Elizabeth Blackwell

The plaque is by the entrance to the Medical School.

Theatreland - heart of the performing arts in London. Alhambra Theatre On thi...