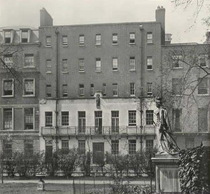 From the National Archives : "St John House was founded in 1848 as a 'Training Institution for Nurses for Hospitals, Families and the Poor'. It was a religious community run by a Master, who was a clergyman, and a Lady Superintendent. The aim was to improve the qualifications and raise the character of nurses by providing moral and religious instruction." "The Institution opened at 36 Fitzroy Square, St Pancras, and was named St John's House because it was in the parish of St John the Evangelist. In 1852 it moved to 5 Queen Square, Westminster, and in 1859 to 6, 7 and 8 Norfolk Street, Strand. It remained in these premises until 1907 when a new house was built at 12 Queen Square, Bloomsbury. The chapel from Norfolk Street was re-erected in this building."

It goes on to explain that initially St John's was one of the few sources for trained nurses but this changed as hospitals trained their own nursing staff. In 1919 it became a centre for nurses trained by St Thomas's Hospital who took up private nursing. We believe the building is now (2018) used by the Wellcome Trust Centre for Neuroimaging.

We are certain that 1907 "a new house" was not built in Queen Square Bloomsbury but that the pre-existing building there was "modernised" as discussed on the page for the memorial.

This section lists the memorials where the subject on this page is commemorated:
St John's House

The Ealing Grove School (for boys) was established by Lady Byron in 1834 on t...

Multi-national school with 94% of its pupils drawn from ethnic minorities and...