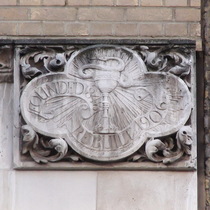 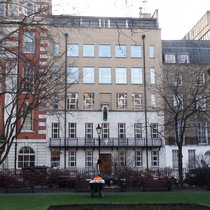 We find this building puzzling since in some ways it looks more modern than those around but it retains many characteristics that suggest early-mid 19th century origins.

The ground and first floors are clad in plain white stone. At the top of this cladding, at either side of the elevation are two plaques: at the left an eagle with a ribbon scroll "St John", and this one at the left. At the top centre of the first floor is a statue of, we assume, St John, wagging a finger over a chalice.

On eBay we found two photos of this building from The Builder, August 1907 - we've put one on our page for the institution, St John's House. These show that, at that date, presumably after the completion of some building works: the windows were all sash (apart from the central 3 French windows onto the balcony); the window openings from floor two up, were all smaller than now; the second floor had 8 openings, not 6 and a blind as now; there was no attic; at the centre of the balcony, where there is now a gap in the ironwork, there was a shield of some kind; above the white cladding the brickwork was not the light, modern style that we now see but something more like that which can still be seen on the building to the right. All in all, the upper floors of the building in the 1907 photos look very old-fashioned for that date.

So, we think the history of the building may be something like: built in the mid 19th century as an institution of some kind; 1906 acquired by St John's, who "modernised" the ground and first floors and that is why it was featured in The Builder; the windows enlarged in the 1950s or 60s.

And some dribs and drabs picked up in our researching:

The Bloomsbury Project, writing about Bloomsbury Baptist Chapel (Shaftesbury Avenue): "In 1901 the congregation opened Bloomsbury House at 10–12 Queen Square as a home for various social activities and hobbies (Faith Bowers, A Bold Experiment, 1999)" but we can find no more about this.

There is a small plain stone plaque at each end of the balcony reading: "E. C. Frere - architect, 1906" and "M ?illegible? & Co. - builders, 1906". April 1882, The Elizabethan reports of a football match, Westminster vs Charterhouse, listing an "E. C. Frere" on the Westminster team - that's the only information we could find about Frere, and it might even be a different man altogether.

This section lists the subjects commemorated on the memorial on this page:
St John's House rebuilt

The plaque has a metal post immediately in front of it, making it impossible ...