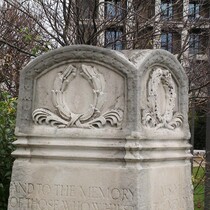 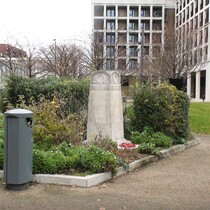 {On the south face:}
And to the memory of those who whilst serving their country by making T.N.T. perished in the explosion in these works, January 19th 1917.
{A list of 16 names - see Subjects commemorated}.

{On the west face:}
Also to the memory of the 58 local residents who were killed and the many injured in the Silvertown Explosion.

Probably erected no more than an year or so after the explosion, this monument used to be the south side of North Woolwich Road, nearly opposite Mill Road. It was behind a wire fence, just inside the entrance to the former Brunner Mond Works. The DLR was built over it. When development of the site began the monument was moved to this garden, in time for a service beside it on 17 January 2017 to commemorate the centenary of the explosion.

From other websites we can tell that, in its original location this monument used to have a different orientation. The face now on the west side used to be on the north side (which must have been the back of the monument). Carl's Cam and Michael Day both have photos of the monument in its previous location.

In February 2017 the Newham Recorder published a photo of the memorial in its new position (but unrestored), with a call for for a memorial plaque to include the names of residents who died in the blast. Since that photo was taken the monument has been restored and the the inscription on (what is now) the west face added.

With inscriptions now on all four faces it would be sensible if the monument was not crowded by plants on three sides.

The carved wreaths on the monument are very pleasing. We think all four faces carry different designs.

The Newham Recorder article makes reference to "four other private plaques following the Great War to honour Bruner Mond employees who had died in battle" but we can find no further information.

We see that the Imperial War Museum treats the deaths from the explosion as 'Civilian War Deaths'.  We can see why, but these deaths were not caused by the enemy dropping bombs on London - the normal cause of civilian deaths in London. The situation has similarities with 'friendly fire', except that the victims were not on the field of battle, nor in the armed forces. It's really only chance that the deaths occurred during wartime so we've decided to treat them as people killed at work in an industrial 'accident'. (Though Serjeant Reeve is a possible exception.) See Workers killed at work.

Following the explosion the factory site was left undeveloped and was used as a car park until development began c.2015 (on-going in 2021).

This section lists the subjects commemorated on the memorial on this page:
Silvertown explosion - monument

58 local residents were killed and many more were injured in the Silvertown E...

To many people's disappointment, the pillar itself is not the needle of the s...

The Rotherhithe people were prescient or just lucky. The way they had worded...