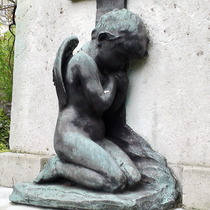 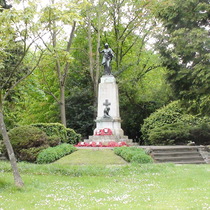 The two VC plaques are laid into the terrace immediately in front of the memorial, Evans to the left of Dwyer.

This section lists the subjects commemorated on the memorial on this page:
Fulham War memorial

Fulham people who died in WW1 and WW2

This section lists the subjects who helped to create/erect the memorial on this page:
Fulham War memorial

This section lists the other memorials at the same location as the memorial on this page:
Fulham War memorial

{Beneath a representation of the Victoria Cross medal:} Private Edward Dwyer,...

{Beneath a representation of the Victoria Cross medal:} Company Sergeant Majo...