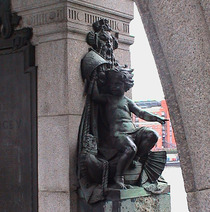 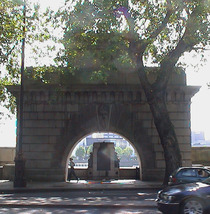 In commemoration of the twenty-fifth anniversary of the accession of His Majesty King George V this reach of the river between London Bridge and Westminster Bridge was with His Majesty's gracious permission named by the Port of London Authority King's Reach.

Chairman - The Right Honourable Lord Ritchie of Dundee - May 1935

The shield (showing the Port of London seal) above the text is surmounted by a galleon and supported on either side by gryphon-type creatures with mer-tails. Below this shield is the Latin motto: Floreat Imperii Portus.

Photographed you can see the cherub to the right of the plaque. He is sitting on ship, from which he seems to have ripped the mast, and is waving this, with sail still attached, in a triumphant fashion. The cherub on the left rides a fish side-saddle, brandishing a trident. Each cherub is watched over by an angry-looking sea-god.

This section lists the subjects commemorated on the memorial on this page:
King George V Silver Jubilee

Reach of the river between London Bridge and Westminster Bridge, named in 193...

This section lists the subjects who helped to create/erect the memorial on this page:
King George V Silver Jubilee

Chairman of the Port of London Authority in 1935.