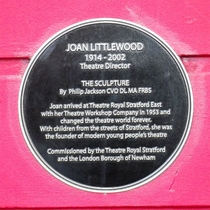 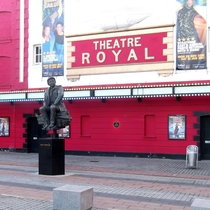 Joan Littlewood, 1914 - 2002, theatre director.
The sculpture by Philip Jackson, CVO, DL MA FRBS.
Joan arrived at Theatre Royal Stratford East with her Theatre Workshop Company in 1953 and changed the theatre world forever. With children from the streets of Stratford, she was the founder of modern young people's theatre.
Commissioned by the Theatre Royal Stratford and the London Borough of Newham.

Littlewood set up the Theatre Royal Stratford East and ran it with her partner Gerry Raffles until 1974.

This section lists the subjects commemorated on the memorial on this page:
Joan Littlewood - Stratford plaque

designed by architect James George Buckle in 1884. From WW1 onwards it endure...

This section lists the subjects who helped to create/erect the memorial on this page:
Joan Littlewood - Stratford plaque

West Ham was merged with parts of Barking and Woolwich to form the London Bor...

This section lists the other memorials at the same location as the memorial on this page:
Joan Littlewood - Stratford plaque

Priss Fotheringham, lived here and was ranked the second best whore in the ci...