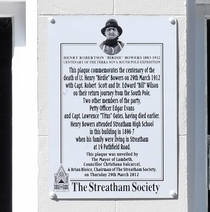 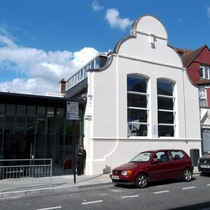 {Beneath a photograph of Bowers:}
Henry Robertson "Birdie" Bowers, 1883 - 1912.
Centenary of the Terra Nova South Pole Expedition.
This plaque commemorates the centenary of the death of Lt Henry "Birdie" Bowers on 29th March 1912 with Capt. Robert Scott and Dr. Edward "Bill" Wilson on their return journey from the South Pole. Two other members of the party, Petty Officer Edgar Evans and Capt. Lawrence "Titus" Oates, having died earlier. Henry Bowers attended Streatham High School in this building in 1896 - 7 when his family were living in Streatham at 19 Pathfield Road.
This plaque was unveiled by The Mayor of Lambeth, Councillor Christiana Valcarcel, & Brian Bloice, Chairman of The Streatham Society, on Thursday 29th March 2012.
The Streatham Society

This section lists the subjects commemorated on the memorial on this page:
Henry Robertson Bowers - SW16

This section lists the subjects who helped to create/erect the memorial on this page:
Henry Robertson Bowers - SW16

A society which aims to raise the awareness and appreciation of its local are...

Chairman of the Streatham Society.

Plaque unveiled by two of his great great grandchildren.

We initially struggled to identify just who the Countess of Rosebery was in 2...