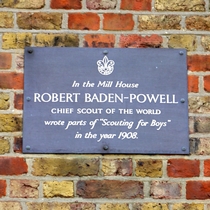 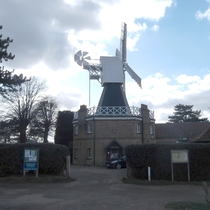 {Below the Boy Scouts' badge:}
In the Mill House Robert Baden-Powell, Chief Scout of the World, wrote parts of "Scouting for Boys" in the year 1908.

The gray plaque is above the entrance to the windmill museum; the brown plaque is at the centre of the four windows towards the left of our picture.

Wondering why Baden-Powell was writing his book here we found this at the Wimbledon Guardian: “Among {Baden-Powell’s} admirers was the Honourable Mrs Maria Fetherstonhaugh, a soldier’s wife and novelist. She and her husband had met him while on holiday in Malta. The Fetherstonhaughs had a somewhat troubled marriage and in 1905 she had bought the Mill House, behind Wimbledon Windmill … as a retreat where she could keep her unusual menagerie including monkeys and penguins. She took the house over on the death of the previous owner, Colonel Tully, … So the place had a military background and seemed highly appropriate to offer Baden-Powell as a quiet getaway where he could write his new book.”

This section lists the subjects commemorated on the memorial on this page:
Robert Baden-Powell - Wimbledon

A Grade II* listed building. It was built by a carpenter, Charles March, and ...

This section lists the other memorials at the same location as the memorial on this page:
Robert Baden-Powell - Wimbledon

To mark the re-publication of Robert Baden-Powell's Scouting for Boys as part...

{Beneath the McDonald's 'Golden Arches' logo:}3000We dedicate the opening of ...

There is a house, still extant, called Round Hill Cottage but Harrild lived a...

Charles Dickens, lived in a house on this site when a boy in 1823. Erected by...