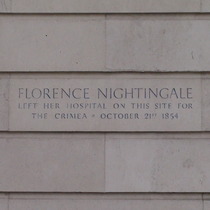 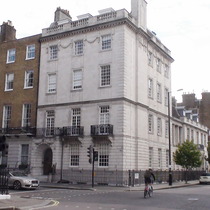 Florence Nightingale left her hospital on this site for the Crimea, October 21st 1854.

We think the history of this hospital is that: it was opened on 15 March 1850 as the Establishment for Gentlewomen During Temporary Illness. In 1902/3 it was renamed the Hospital for Invalid Gentlewomen.

2017: Our friend and colleague, Ruth Richardson, has been researching Nightingale as part of the campaign to save the Nightingale wards at the old Cleveland Street Hospital. She points out that the present building is not the one in which Nightingale worked August 1853 - October 1854, but stands on the same site as that hospital. “Miss Nightingale was Superintendent in 1854 when the cholera epidemic hit London (the same epidemic in which John Snow persuaded the local authority to remove the pump-handle). At the end of August 1854 she left this Harley Street hospital in the hands of her staff and went to nurse the sick and dying poor at the Middlesex Hospital, during the peak of the epidemic. A fellow nurse there died of cholera, caught from the patients, who mostly came from the very poor area around Rathbone Place. Luckily Miss Nightingale remained well, and the following month was called to serve in the Crimea.”

In 1909 this Harley Street hospital moved to new premises in Lisson Grove as the Florence Nightingale Hospital for Gentlewomen and we think it was probably then that the building here was replaced, it looks about the right date.

The plaque is in our photo, but behind the traffic lights.

This section lists the subjects commemorated on the memorial on this page:
Florence Nightingale - Harley Street

Nurse, statistician, author. Born in Italy (go on, guess which city) while he...

Orwell lodged here for a short time, during which he had a punch-up with anot...