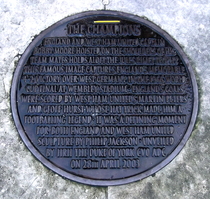 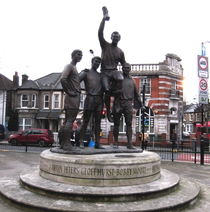 The Champions. England and West Ham United captain Bobby Moore hoisted on the shoulders of his team mates holds aloft the Jules Rimet trophy. This famous image captures England's memorable 4 - 2 victory over West Germany in the 1966 World Cup final at Wembley Stadium. England's goals were scored by West Ham United's Martin Peters and Geoff Hurst whose hat trick made him a footballing legend. It was a defining moment for both England and West Ham United.
Sculpture by Philip Jackson. Unveiled by HRH the Duke of York CVO ADC on 28th April 2003.

In the 1966 Football World Cup on 30 July, England beat Germany and the whole country went football crazy. This statue recreates an event that happened immediately after the game and pictures of which were spread far and wide. A number of the key players in this game were from West Ham, hence the location of this statue.

The plaque is horizontal on the plinth in front of the sculptural group.

2016: The Hammers are about to move out of the nearby Boleyn Ground into the Olympic Stadium and we've heard they will take this statue with them. The old ground will be developed for housing and there are plans to erect another statue there.

2018: The Sun reports that Newham council announced the decision that the statue will stay at this location.

This section lists the subjects commemorated on the memorial on this page:
World Cup Champions

This section lists the other memorials at the same location as the memorial on this page:
World Cup Champions

On the wall high above the plaque is the school shield. The scroll below the...