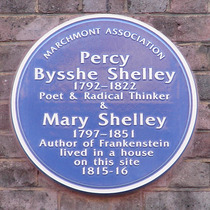 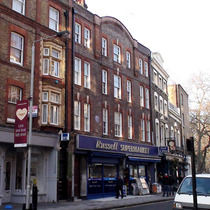 After their elopement in July 1814 the Shelleys lived here with Claire Clairmont, Mary's step-sister. Their son was born, presumably here, in January 1816. In May 1816 they all left to join Lord Byron in Geneva. The Shelleys were not married until December 1816. Clairmont (1798 - 1879) was made pregnant and dumped by Byron in her teens. The child, Allegra, was sent to a convent by Byron, where she died aged 5. Clairmont lived with the Shelleys for most of their marriage and there was gossip that she had a child by Percy. Towards the end of her life she wrote a vengeful memoir.

This section lists the subjects commemorated on the memorial on this page:
Percy & Mary Shelley

Character created by Mary Shelley in her eponymous book. The Somers Town Mur...

This section lists the subjects who helped to create/erect the memorial on this page:
Percy & Mary Shelley