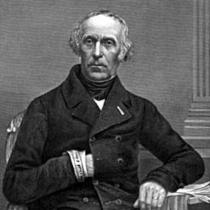 Historian and statesman. Born François Pierre Guillaume at Nimes, France. His father was executed during the 'Reign of Terror' and he and his mother fled to Geneva. Eventually he went to Paris to study law but drifted into literature and became a professor at the Sorbonne. He was elected to parliament in 1830, rising to become prime minister from 1847 - 48, but went into exile in England following the 1748 revolution. On returning to France in 1851 he concentrated on historical scholarship and died at Val-Richer.

This section lists the memorials where the subject on this page is commemorated:
François Guizot