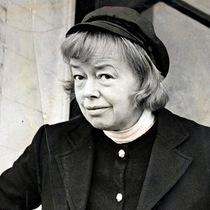 Theatre director. Born Stockwell. 1945 set up the Theatre Workshop which moved into the Stratford Theatre Royal in 1953, many of the company living on site while it was being restored. 1963 created the stage production "Oh, What a Lovely War!" which was recreated as a film, as was her 1958 "A Taste of Honey".

Married to Ewan MacColl, 1934-1950, and then had a relationship with Gerry Raffles until his death in 1975. After that she worked in France for a time. Died in the London flat of Peter Rankin, a friend and co-worker for 40 years.

This section lists the memorials where the subject on this page is commemorated:
Joan Littlewood