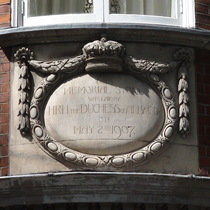 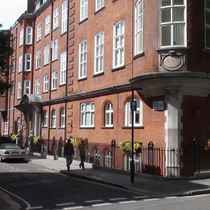 The two be-wreathed babies are on the building on the south-east side of the street, which was the 1914 nurses home; the others on the, photographed, north-west side. The arch at the left of our photo contains a nicely foliated cartouche "The Infants Hospital". Since the hospital closed in 1995 this building and the nurses home have been converted into flats.

These swaddled babies have their inspiration in work by Della Robbia. His bambini were installed on the Ospedale degli Innocenti (Hospital of the Innocents) in 1487 in Florence and the image of a swaddled baby has since become a symbol of paediatrics.

We can't get over the impression that these babies are semaphoring to each other, possibly asking when the sack race starts.

Note: Udall Street was known as Alfred Street until probably about 1930-40.

This section lists the subjects commemorated on the memorial on this page:
Infants Hospital - plaque

This section lists the subjects who helped to create/erect the memorial on this page:
Infants Hospital - plaque

Born in Arolsen as Helena Frederica Augusta of Waldeck & Pyrmont. Married, in...

This section lists the other memorials at the same location as the memorial on this page:
Infants Hospital - plaque

These fountains and the busts against the north wall of the square were erect...

On this site stood the historic May Fair.

This plaque is not particularly interesting visually so we are showing the ro...