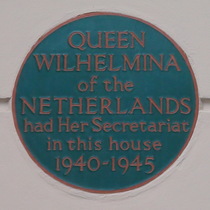 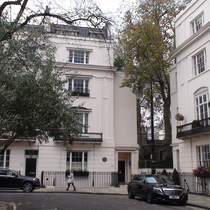 Queen Wilhelmina of the Netherlands had Her Secretariat in this house, 1940 - 1945.

The website of the United Kingdom NL Embassy wrote that the Dutch Queen's first home in London was at 82 Eaton Square but then "The Queen stayed {in Chester Square} during the Blitz, and would only go to the refuge shelter in the back garden during heavy bombing. Prince Bernhard’s office was on the ground floor of the building. He met Erik Hazelhoff Roelfzema, a Dutch RAF pilot, here, where they discussed the Dutch espionage service. This service (‘Contact Holland’) was from then on led by Erik Hazelhoff Roelfzema and Peter Tazelaar from the residence’s garden house."

It's a bit confusing because that site also said "When the bombardments during the Blitz became too dangerous, the Queen moved to Stubbings House in Maidenhead. She moved in on 30 October 1940 and stayed until the beginning of 1944." Also the Queen and the Prince must also have at least visited Claridge's quite often because they are reported as seeking shelter from the bombing in the basement.

That website has now changed to be: United Kingdom NL Embassy

This section lists the subjects commemorated on the memorial on this page:
Queen Wilhelmina

Site of the Priory of the Blackfriars, founded 1278. The Corporation of the C...

From this site John Logie Baird broadcast the first television programme in G...

{Below an image of a Victoria Cross medal:}Lieutenant Colonel Frank Roberts, ...

Mann lived here in a very small flat, only 500sq ft. But it had superb light...