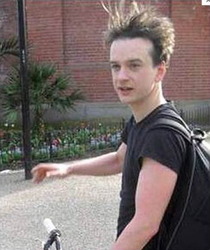 Killed, aged 28, following a collision with a lorry while cycling through Dalston Junction. Died two days later at the Royal London Hospital. A Goldsmiths graduate, Dan had been working part-time at the PayneShurvell gallery in Shoreditch for a few months. Road.cc tells more about Dan.

In July 2013 Youkn Owwho contacted us via Facebook to correct the dates we had.   We did some more thorough research and it seems that the collision was on 2nd February and Dan died 2 days later on 4th February.  Thanks Youkn for the correction.

This section lists the memorials where the subject on this page is commemorated:
Dan Cox

{The bike is covered with flowers, gifts and notes of condolence.}