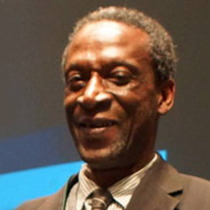 A grandfather in his 60s, killed at about noon on a Monday, run down by a tipper truck.

From the Standard: Richard Muzira was “a writer who endured years of torture as a political prisoner in Zimbabwe before being freed in a deal brokered by Margaret Thatcher.” “Muzira grew up during Zimbabwe’s War of Liberation and spent his teens and early twenties in and out of jail until intervention by the Thatcher government in 1979 led to the end of white minority rule. … He came to England as a refugee and studied film at the University of Westminster, before becoming a volunteer for mental health charity CoolTan Arts. The father-of-four was given a “Local Heroes” award for his community work from the Bank of America in 2011.”

This section lists the memorials where the subject on this page is commemorated:
Richard Muzira

The ghost bike in our photo was stolen but replaced with another in October 2...