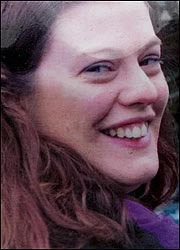 Age: 32, struck by a heavy goods vehicle at 6.40am on a Monday. An air ambulance rushed her to the Royal London Hospital in Whitechapel. She died shortly afterwards. The poor state of road surface at this junction had been widely noted, and may have been a contributing factor to the collision. She had studied at London Metropolitan University, 2006 -2007.

Our colleague, Andrew Behan, has provided the following research. Lucinda Mary Ferrier was born on 30 October 1975, the elder daughter of Nicholas J. Ferrier and Enid M. Ferrier née Blackman. Her birth was registered in the 4th quarter of 1975 in the Merton registration district.

Her younger sister, Olivia Margaret Ferrier's birth was registered in the 4th quarter of 1978 in the Sutton registration district.

She was also a half sister to; Paul Nicholas Ferrier (b.1966), Charles Patrick J. Ferrier (b.1968) and Andrew John Ferrier (b.1969) who were the sons of her father and his previous wife née McMaster.

Electoral registers from 2006 to 2008 state that she was at 26 Avondale Road, London, N15 3SJ and the London Gazette of 14 October 2009 confirms this was her last address, that she was a Human Resources Assistant and that her estate was being administered by a Stuart Jones of the same address.

This section lists the memorials where the subject on this page is commemorated:
Lucinda Ferrier

We must credit The Sun for the close-up picture. The bike was gone by 2019.

For many years commuted by bike from West Drayton to his job as a cycle couri...