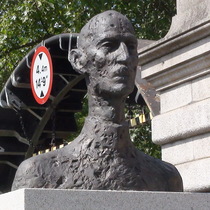 From Royal House of Norway: "The bust of King Haakon ... is a variation of the large statue of King Haakon located outside of the Ministry of Foreign Affairs in Oslo. The statue was sculpted by Nils Aas, and the bust in London was fashioned in close cooperation with Mr Aas’s son, architect Atle Aas. The City of Oslo, which owns the statue, also gave its permission to create the bust."

Unveiled by Princess Astrid to mark the opening of the refurbished St Olav’s Square.

This section lists the subjects commemorated on the memorial on this page:
Haakon VII

This section lists the subjects who helped to create/erect the memorial on this page:
Haakon VII

This section lists the other memorials at the same location as the memorial on this page:
Haakon VII