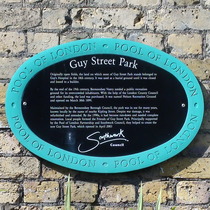 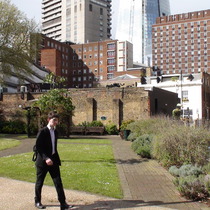 Guy Street Park
Originally open fields, the land on which most of Guy Street Park stands belonged to Guy's Hospitial in the 18th century. It was used as a burial ground until it was closed and leased to a builder.
By the end of the 19th century, Bermondsey Vestry needed a public recreation ground for its overcrowded inhabitants. With the help of the London County Council and other funding, the land was purchased. It was named Nelson Recreation Ground and opened on March 30th 1899.
Maintained by the Bermondsey Borough Council, the park was in use for many years, known locally by the name of nearby Kipling Street. Despite war damage, it was refurbished and extended. By the 1990s, it had become run-down and needed complete renovation. Local people formed the Friends of Guy Street Park. Principally supported by the Pool of London Partnership and Southwark Council, they helped to create the new Guy Street Park, which opened in April 2003.

This section lists the subjects commemorated on the memorial on this page:
Guy Street Park

This section lists the subjects who helped to create/erect the memorial on this page:
Guy Street Park

Steve Roffey wrote to say that this plaque was lost in 2018. Checking on Goog...