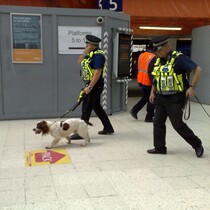 A national special police force that polices the railway network of England, Wales and Scotland. The force polices more than 10,000 miles of track and more than 3,000 stations and depots - tasked with ensuring the safety of the millions of people who use and work on the railways. BTP also polices the London Underground, Docklands Light Railway, the Midland Metro tram system, Croydon Tramlink, Tyne and Wear Metro, Glasgow Subway and the London Cable Car. The force is funded primarily by the rail industry.

The modern organisation was created in 1949.

This section lists the memorials where the subject on this page is commemorated:
British Transport Police

The plaque is just inside the garden. In the bright sunlight we were not able...

Auxiliary Fireman Cecil Farley was born on 1 June 1897 in Tooting, the son of...