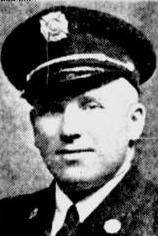 Canadian firefighter and competitive diver. A section leader from Saskatoon, he died while training in Hampshire.

Andrew Behan has kindly provided this research and also found the photo: Section Leader Lawrence Erle Woodhead was born on 19 May 1911 in Leeds, Yorkshire. He was one of the four children of Harry Woodhead and his wife Louie Woodhead. His father was a Postal Department worker. He became a firefighter in Saskatoon, Saskatchewan, Canada in about 1935 and on 1 June 1938 he married Sadie Elizabeth Bradley. They had one daughter, Donna Elaine Woodhead and they lived at 121 Third Street, Saskatoon. On 29 July 1942 he enlisted into the Canadian Corps of Firefighters and his Service Number was T.305.

He came to England to assist the National Fire Service and died, aged 33 years, on 16 June 1944 from injuries sustained when his fire appliance was involved in a road traffic collision on a convoy exercise in the New Forest Registration District, Hampshire. He is buried in Plot 49, Row J, Grave 49, in the Brookwood Military Cemetery, Brookwood, Woking, Surrey. He was posthumously awarded both the War Medal 1939-1945 and the Defence Medal. He is also commemorated on the National Firefighters Memorial at the junction of Carter Lane and Sermon Lane, London, EC4 and on the Firefighters Memorial in Saskatoon.

This section lists the memorials where the subject on this page is commemorated:
Lawrence E. "Curly" Woodhead

{On the floral emblem:} Canada fire fighters. In memory of three members of ...

Born near Sunderland. Joined the army against his father's wishes. Served in ...