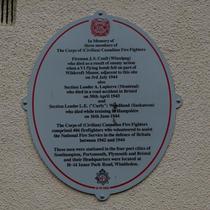 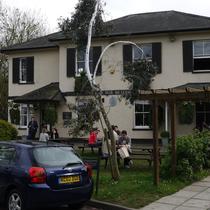 In memory of three members of the corps of (civilian) Canadian fire fighters:
Fireman J.S. Coull (Winnipeg) who died as a result of enemy action when a V1 flying bomb fell on part of Wildcroft Manor, adjacent to this site on 3rd July 1944, also section leader A. Lapierre (Montreal) who died in a road accident in Bristol on 30th April 1943, and section leader L.E. ("Curly") Woodhead (Saskatoon) who died while training in Hampshire on 16th June 1944.
The corps of (civilian) Canadian fire fighters comprised 406 firefighters who volunteered to assist the National Fire Service in the defence of Britain between 1942 and 1944.
These men were stationed in the four port cities of Southampton, Portsmouth, Plymouth and Bristol and their headquarters were located at 10-14 Inner Park Road, Wimbledon.

This section lists the subjects commemorated on the memorial on this page:
Canadian WW2 firefighters

This section lists the subjects who helped to create/erect the memorial on this page:
Canadian WW2 firefighters

St George’s Hospital was established on this site in 1733 in a country home b...