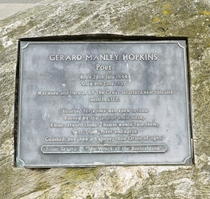 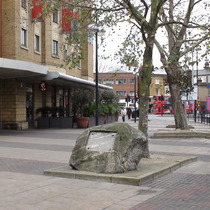 'Loathed for a love men knew in them,
Banned by the land of their birth,
Rhine refused them. Thames would ruin them;
Surf, snow, river and earth
Gnashed: but thou art above, thou Orion of light.'

From: Stanza 21 'The Wreck of the Deutschland'

Seamus Heaney unveiled the plaque and performed at a poetry reading later in Stratford Town Hall as part of the celebrations for the 150th anniversary of Hopkin's birth.

The Independent explained the connection between Stratford and the wreck of The Deutschland. "In 1875, Hopkins wrote his longest and most famous poem, 'The Wreck of the Deutschland', in memory of five Franciscan nuns who were among the 40-odd people drowned when the Deutschland, sailing from Bremen to North America, struck a sandbank near the mouth of the Thames Estuary during a snowstorm. Dramatic reports of the shipwreck and aftermath gripped readers of the Times. Hopkins was particularly taken with the story of 'the chief sister, a gaunt woman six ft high, calling out loudly and often 'O Christ, come quickly]' till the end came.' The Deutschland also has a Stratford connection: four of the nuns (the body of the fifth was lost) were brought by train from Harwich to be laid out in the friary opposite Hopkins's old house. The funeral sermon was given by Cardinal Manning. For many Catholics in Britain, the nuns, driven out of Germany by Bismarck's anti-Catholic legislation, were a symbol of religious persecution."

The report goes on to name the friary as the Church and Friary of St Francis in The Grove and to say "the room where the nuns were laid out - their habits removed, laundered, ironed and replaced by a local girl, Mary Broadway, who later became a nun herself - is now used as a toddlers' playgroup." The nuns were buried at St Patrick's Cemetery, Leytonstone with, it is said, 4,000 people in the funeral procession and another 40,000 lining the route.

On our first visit, December 2011, high metal commodity prices meant that the theft of memorial plaques had become a common occurrence, and this one was missing. Richard Durack told us that the plaque was replaced in 2012 before the start of the London Olympics, and we have since returned to get our photo. The replacement seems an exact copy of the original.

Hopkins's birth-place, a substantial Victorian house, was bombed in WW2 and later pulled down.

This section lists the subjects commemorated on the memorial on this page:
Gerard Manley Hopkins - E15

Wreck of the Deutschland

The Deutschland was an iron passenger steamship of the Norddeutscher Lloyd li...

This section lists the subjects who helped to create/erect the memorial on this page:
Gerard Manley Hopkins - E15

The first quote comes from the ancient Greek writer Hermes Trismegistus; the ...