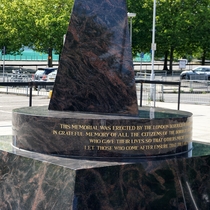 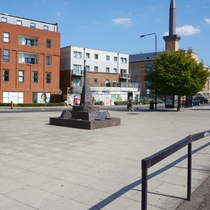 {Around the memorial:}
This memorial was erected by the London Borough of Harrow in the year 2005 In grateful memory of all the citizens of the borough and from around the world who gave their lives so that others might live in freedom. Let those who come after ensure they are not forgotten.

{On a plaque on a nearby wall:}
The Harrow war memorial was dedicated by the Right Reverend the Bishop of Willesden in the presence of His Royal Highness the Duke of Gloucester KG GCVO 26th June 2005.

A very modern war memorial (which even has seating space for the weary), but we cannot find any information about the designer/sculptor. Modern also in the non-specific wording, with no mention of any particular wars.

This section lists the subjects commemorated on the memorial on this page:
Harrow Civic Centre war memorial

Victims of war in Harrow

This section lists the subjects who helped to create/erect the memorial on this page:
Harrow Civic Centre war memorial

Bishop of Willesden from 2001. He caused controversy when Prince William and ...

The statue represents a soldier. To the left, in the cream marble, is a carve...