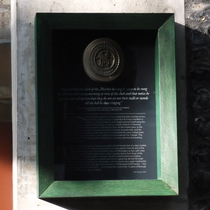 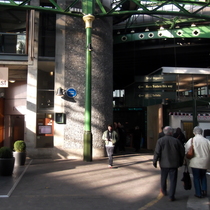 {Surrounding a die of the market's crest:}
Trustees of the Borough Market Southwark.

{Beneath the die:}
"Ordered that the clerk of the market do ring or cause to be rung the market bell every morning at nine of the clock and that notice be given to the hall porters that they do not set out their stalls or stands till the bell be done ringing”.
One of the rules drawn up by the newly formed committee of the market at the Three Tun Tavern, Borough on 26th April 1757.
There has been a food market in the Borough for as long as there has been a bridge across the river, linking the south with the city and ensuring a regular flow of hungry travellers in need of refreshment or supplies. For several centuries this market crammed itself along the main highway, starting at the foot of the bridge, creating a chaotic hubbub of fishwives, local bakers, Kentish farmers and barely controlled livestock. As the market grew, so the congestion on one of London’s most important arteries became unsustainable, and the authorities moved to ban trading on the high street. Local parishioners were instead given the opportunity to purchase land for a new market on the site known as The Triangle. This new market opened in 1756 and has been trading here ever since, growing and evolving as the years have passed.
The ringing of the bell has been closely associated with the formal start of a day’s market trading. At the peak of the old market’s congestion it was also used to mark the end of the day, with the bailiff risking a fine of £2 if he failed to disperse the traders at 3pm with a few hefty peals of the handbell. With today’s traders a less anarchic bunch than those of the medieval market, the ringing of the bell is no longer needed to exert control over trading hours, but the casting of a beautiful new bell for this historic space has allowed Borough Market to create a welcome echo of an old tradition, with its chimes once again marking the start of each market day. The bell was cast by the famous Whitechapel Bell Foundry - the makers of Big Ben and the Liberty Bell - and features the crest of the Trustees of Borough Market, the die for which is also on display.
14th February 2013

The Prince of Wales and the Duchess of Cornwall carried out the first ringing of the bell.

Note: the colonnade with glazed upper section that fronts this building on Stoney Street was not designed for this location. Londonist informs: "The façade grafted onto this particular part of Borough Market is actually the old E M Barry-designed Floral Hall from the Royal Opera House {Covent Garden}, which was put in storage when the Opera House was done up in the 1990s. It was bought by Borough Market for £1 and added to the building around 2003."

This section lists the subjects commemorated on the memorial on this page:
Borough Market Bell (1)

This foundry is the oldest manufacturing company in the UK and is still makin...

This section lists the subjects who helped to create/erect the memorial on this page:
Borough Market Bell (1)

Borough Market is a charitable trust, run by a board of volunteer trustees. T...

This section lists the other memorials at the same location as the memorial on this page:
Borough Market Bell (1)

The bell says 'Since 1754', whilst the accompanying plaque says the market op...

To the glory of God and in proud memory of the members of the club and of the...