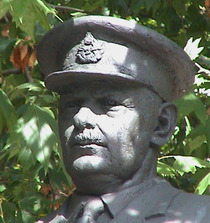 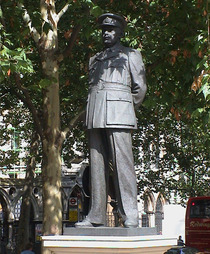 {On the front of the plinth, under the RAF wings:}
Marshal of the Royal Air Force Sir Arthur Harris BT, GCB, OBE, AFC.
{On the plaque on the right side of the plinth:}
In memory of a great commander and of the brave crews of Bomber Command, more than 55,000 of whom lost their lives in the cause of freedom.
The nation owes them all an immense debt.

Unveiled by the Queen Mother on 31 May 1992, the 50th anniversary of the first Allied 1,000 bomber raid on 30 May/31 May 1942. Actually 1,047 aircraft took part in the raid. 1992 was also Harris's centenary year. Protesters against the statue prior to its erection included the Mayor of Cologne. The Queen Mother's speech was disrupted with shouts of "mass murderer" and following repeated vandalism the statue was subjected to a 24-hour guard for some months.

This section lists the subjects commemorated on the memorial on this page:
Bomber Harris

This section lists the subjects who helped to create/erect the memorial on this page:
Bomber Harris