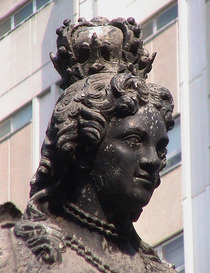 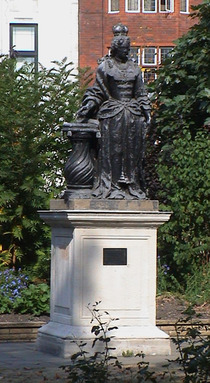 This statue thought in the nineteenth century to be of Queen Anne is now widely regarded as that erected in April 1775 to commemorate Queen Charlotte consort of King George III.

This square, the site of an ancient reservoir, was set out in 1716 on land owned by Sir Nathaniel Curzon and originally known as Devonshire Square. It was renamed in honour of Queen Anne, the reigning monarch, but Queen Charlotte does have a connection as shown by the story behind the naming of the pub, The Queen's Larder, at number 1 in the square: Her mad husband, George III, stayed at a doctor's house in the square where he was being treated. A small cellar beneath this pub was rented as a store where the queen could keep special foods for her husband.

2017: Royal Central has a blog page on this statue.

This section lists the subjects commemorated on the memorial on this page:
Queen Charlotte