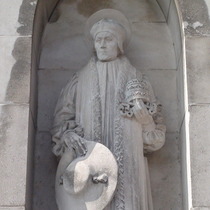 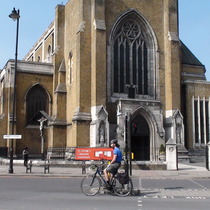 This church is the Metropolitan Cathedral Church of St George, the seat of the Archbishop of Southwark. The building was designed by Pugin and opened in 1848. Until Westminster Cathedral was opened in 1903 St George's was the centre of Catholic London. Badly damaged in WW2 it was rebuilt 1953-8, but the tower was not reconstructed - it does not exist much above what our photo shows. Photos of the old church suggest that the "rebuild", certainly at this end, was more of a major repair job, keeping much of the old external walls, etc. The architect was the splendidly-named Romilly Craze, who specialised in repairing bomb-damaged churches.

It was surprisingly difficult to confirm our hunch that these two represent the Catholic martyrs, St Fisher and St More, but we finally found it at Archdiocese of Southwark. More on the left; Fisher on the right.

This section lists the subjects commemorated on the memorial on this page:
Fisher - St George's Cathedral

This section lists the other memorials at the same location as the memorial on this page:
Fisher - St George's Cathedral

{On plaque attached to the shaft of the cross outside the church:} Pray for t...