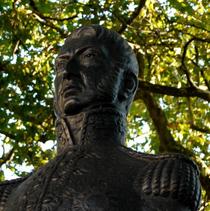 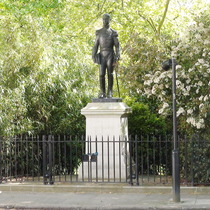 {Left of plinth:}
The Argentine-British community in Argentina to the people of London.

{Right of plinth:}
His name represents democracy justice and liberty.

{On the left of the statue base:}
Juan Carlos Ferraro, Buenos Aires, 1993.

{Inscribed on the lower right side of the statue base:}
Fundicion R-Buchhass, Argentina {the founder}

{On the ground in front of the statue, a plain slate plaque:}
This monument was unveiled by HRH the Duke of Edinburgh KG, KT in the presence of Senator Eduardo Menem the President of the Honourable Senate of the Argentine Republic; Councillor Angela Hooper CBE, the Lord Mayor of Westminster; The Rt. Hon. Douglas Hurd MBE, MP, the Secretary of State for Foreign and Commonwealth Affairs and H. E. Ambassador Mario Campora.
November 1994.

The ornate plaque is on the ground in front of the statue. It was added and unveiled on the 150th anniversary of San Martin’s death, 17 August 2000.

This section lists the subjects commemorated on the memorial on this page:
Jose de San Martin statue

This section lists the subjects who helped to create/erect the memorial on this page:
Jose de San Martin statue

Ambassador. Born in Mendoza, Argentina.  He entered the diplomatic service in...

This section lists the other memorials at the same location as the memorial on this page:
Jose de San Martin statue