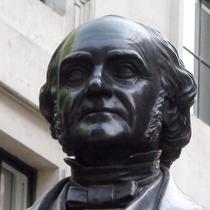 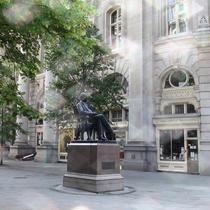 {Engraved on the front of the granite plinth:}
George Peabody MDCCCLXIX

{On a bronze plaque attached below:}
Born Danvers, Mass, U.S.A. 18th February 1795. Died London England 4th November 1869. American philanthropist and great benefactor of the London poor. Accorded the honorary freedom of the City of London 10th July 1862. This statue by W. W. Story was unveiled on the 23rd July 1869.

Unveiled by the then Prince of Wales, unusually in the subject's lifetime. Too ill to attend the ceremony Peabody died 3 months later. At one stage we thought there were only a few London statues erected in the lifetime of the original and we attempted to list them at Fenner Brockway. However it turns out there are too many to list.

A replica of this statue stands in Baltimore.

2021: Christine Wagg, in-house historian at Peabody, wrote to say "Whilst it is true that his health worsened in the months before his death in November, the actual reason for his absence was that he was out of the country – paying his last-ever visit to his native land, the United States."

We've heard it claimed that this is the only seated statue in London but we can name quite a few others: the Roosevelt and Churchill double; John Cartwright; the ballet dancer at the Bow Street plaque; Columbus in Belgrave Square; Sarah Siddons; Doctor Alfred Salter in SE16; the cross-legged Gandhi; Quinton Hogg; Lord Holland, the be-togaed Charles Fox and Brunel at Paddington, although that last is under cover, so it may not have been considered as 'public'. (Abraham Lincoln is hovering, about to join the lazy group.) If we allow royals into this group Queen Victoria seems particularly sedentary: being seated in at least 4 of the statues we've found of her. And what about all the equestrian statues - surely they count? The claim was never true since the Cartwright was erected in 1831, 38 years before the Peabody. So that's one London myth demolished.

Sorry about the glare in the picture. We're sure proper photographers would tut but we rather like it.

'London a Pilgrimage', 1872, by Gustave Doré and Blanchard Jerrold has, amongst all the other wonderful drawings, an image showing this statue. It is on a plinth about twice as high and protected by a ring of railings. Also neither of the buildings shown in the background match those now standing, two of which were surely there at the time. Artistic licence must explain this.

Ian Visits points to the circular water drain in the pavement around the statue and explains that in the 1980s this statue replaced the fountain that used to sit here, and that fountain was moved a short distance away.

Note also that the King Edward Street statue of Rowland Hill was here until 1928.

Another complexity is introduced by a c.1910 photo of this statue on Spitalfields Life - the background buildings are not those we see today, including the 1842 Royal Exchange. We wonder if the statue was somewhere else, or possibly just facing in a different direction.

This section lists the subjects commemorated on the memorial on this page:
George Peabody statue

This section lists the subjects who helped to create/erect the memorial on this page:
George Peabody statue