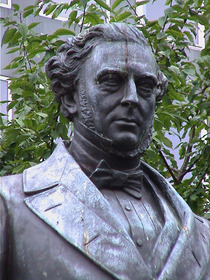 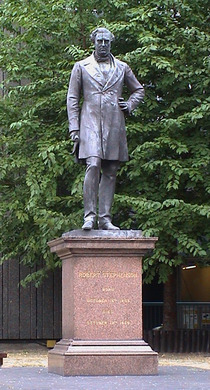 We had thought that this statue of Stephenson was the statue that can be seen in photos of the Great Hall of the Victorian Euston Station. However that statue does not quite tally with this one so we re-researched and found this in the Listing text: "... presented to the London & North Western Railway by the Institute of Civil Engineers ... the statue formerly stood between the two entrance lodges in Euston Square, and with them is the only survivor of the formal 1870 layout which, with the Doric Arch, was destroyed in 1969."

So we (and others) had confused a marble statue of George S. with a bronze statue of his son Robert S. Whoops. But we think we've got it straight now.

The Euston Arch Trust (2019: sadly link has died) has lots of fascinating stuff about the Station, the Square and that Arch.

2020: The statue has been taken into storage while the HS2 works continue.

This section lists the subjects commemorated on the memorial on this page:
Robert Stephenson statue

Railway and civil engineer.  Born near Newcastle upon Tyne.  Son of George St...

This section lists the subjects who helped to create/erect the memorial on this page:
Robert Stephenson statue