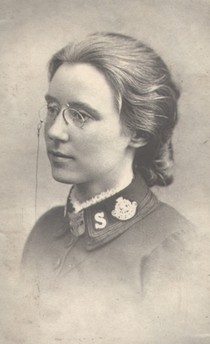 Born in Monmouthshire as Florence Eleanor Soper (her father having the odd first name of 'Isabell'). Joined the Salvation Army in 1880 and met Bramwell through his sister Catherine, marrying him in 1882, after which she took charge of all the SA's women's social work. When Bramwell's mother died in 1890 Florence took on the role of the SA's first lady. Died at home in Berkshire.

About her wedding, the picture source tells us: "A congregation of six thousand were charged a shilling each to attend, the money being used to purchase the notorious 'Eagle Tavern' public house and the neighbouring ‘Grecian Theatre’, on City Road, later to be used as a Salvation Army hall."

This section lists the memorials where the subject on this page is commemorated:
Florence Booth

This stone was laid for the glory of God by Mrs Bramwell Booth of the Salvati...

A charity that campaigns to end homelessness and bad housing in England and S...

The idea of adjusting clocks in order to benefit from daylight was first prop...

Brother of John Burtt. They had been found on the street and were educated i...