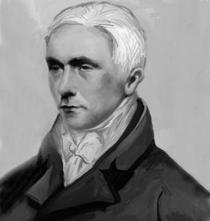 Anti-slavery campaigner. Born Scotland. Aged 16 emigrated to Jamaica and saw slavery first hand as a slave overseer on a sugar plantation. Returned to England 1789. Sister Jean’s husband, Thomas Babington, introduced him to the evangelical Christian Clapham Sect which included William Wilberforce and other abolitionists. Sent to work as an administrator in Sierra Leone, at a colony set up as a home for emancipated slaves. Governor of Freetown in Sierra Leone 1794 - 99.

Back in England he was part of the campaign against the slave trade, abolished in the British Empire in 1807. Later a leading campaigner against slavery itself. 1825 founded the monthly Anti-slavery Reporter which analysed and exposed the enormities of slavery. It not only provided abolitionist MPs with evidence to counter slave owner claims that conditions in the West Indies were improving. It also turned the abolition cause into a mass movement, groups across the country subscribing to the Reporter, petitioning Parliament and organising boycotts of West Indian sugar.

Has been called the unsung hero of the abolition movement. 1833, as the Parliamentary fight was won, Thomas Fowell Buxton, leader of the abolitionists when Wilberforce retired in 1825, wrote to Macaulay: “My sober and deliberate opinion is that you have done more towards this consummation than any other man. For myself, I take pleasure in acknowledging that you have been my tutor all the way and that I could have done nothing without you.”.

Father of Thomas Babington Macaulay. Commemorated with a bust in Westminster Abbey.

The usually trustworthy Oxford Dictionary of National Biography has him buried in Mecklenburgh Square which has never even been a burial ground, so we believe that information to be false. The same source reports that he died at his lodgings in Clarges Street, W1, not Bloomsbury.

Much of this information has been provided by Friends of St George's Gardens and we are very grateful for their assistance.

This section lists the memorials where the subject on this page is commemorated:
Zachary Macaulay

Politician. He was elected as Liberal member of parliament for the southern d...

In January 1972, at the time of Bloody Sunday, Hymans is reported as being in...