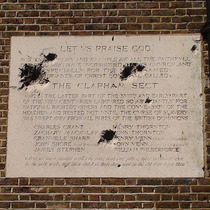 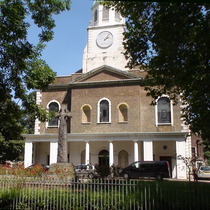 Let us praise God. for the memory and example of all the faithfull departed who have worshipped in this church and especially for the below named servants of Christ some have called 'The Clapham Sect' who in the latter part of the XVIIIth and early part of the XIXth centuries laboured so abundantly for national righteousness and the conversion of the heathen, and rested not until the curse of slavery was swept away from all parts of the British Dominions.

"O God we have heard with our ears and our fathers have declared unto us, the noble works that Thou didst in their days and in the old time before them".

Some amazing research work has been done on this and other Clapham memorials.

This section lists the subjects commemorated on the memorial on this page:
Holy Trinity Clapham - Clapham Sect

Individuals and groups were sent to places where a need was seen for Christia...

This section lists the other memorials at the same location as the memorial on this page:
Holy Trinity Clapham - Clapham Sect

The Latin quote is  from the Roman poet Horace's Odes and translates roughly ...

{On the base of the memorial:} To the men of Clapham who died for England, 19...

Apart from the actual names the two plaques are the same. Our photo shows th...

Metropolitan Borough of Saint Pancras This stone commemorates the visit of H....