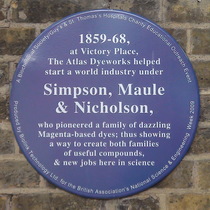 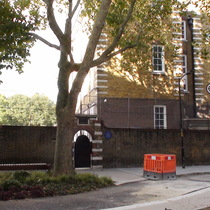 The rather odd wording of the plaque is explained by an item in the RSC Historical Group Newsletter, February 2010. As part of National Science Week 2009 a play about the invention of magenta, was researched and written, and then performed by children at this site.

The site is now a school, built in the period during which each school had separate entrances for types of pupils. The "Boys" and " Girls & Infants" labels here are made of nice ceramic letters.

This section lists the subjects commemorated on the memorial on this page:
Simpson, Maule and Nicholson

Clayhall Tea House stood near here - a famous place of refreshment in the 18t...

Braidwood Academy for the Deaf and Dumb, first school in England for the educ...

Our visit coincided with a small exhibition about the history of the site. An...