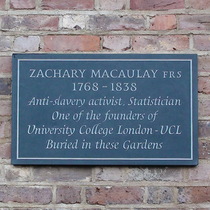 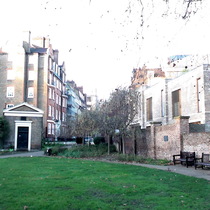 Zachary Macaulay FRS, 1768 - 1838, anti-slavery activist, statistician, one of the founders of University College London - UCL, buried in these gardens.

When this graveyard became a park in the late 19th century Macaulay's gravestone, along with many others, was lost but in 2018, the 250th anniversary of his birth, the Friends of St George’s Gardens erected a plaque in his memory.

This section lists the subjects commemorated on the memorial on this page:
Zachary Macaulay - WC1

This section lists the subjects who helped to create/erect the memorial on this page:
Zachary Macaulay - WC1