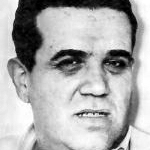 Wrestling coach. Born Yosef (or Yossef) Gutfreund in Romania. He was part of the Israeli team at the 1972 Olympic Games in Munich. He was awakened by Palestinian terrorists infiltrating the Olympic village, and warned his fellow colleagues, giving time for two of them to escape. He was later murdered, along with ten other members of the team.

This section lists the memorials where the subject on this page is commemorated:
Yosef Gutfreund

The Hackney Gazette give the unveiling date as 25th but we believe Boris John...

Football player and manager. Born in Kiveton Park, near Rotherham. He played ...

The joint (along with Scotland) oldest national football team in the world. I...