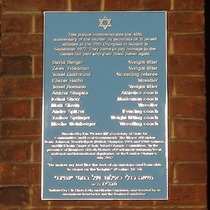 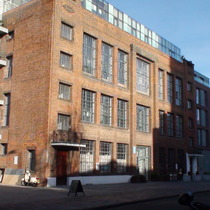 Unveiled by Eric Pickles MP (Secretary of State for Communities and Local Government);The Mayor of London Boris Johnson;Ben Helfgott (British Olympian 1956 and 1960 Games); and Mr Efraim Zinger (Chair, Israel Olympic Committee), in the presence of Members of both Houses of Parliament and many local, national and international dignitaries, at the the London Olympics, July 2012.

"He makes my feet like the feet of an antelope and I am able to stand on the heights" (Psalms 18:34)

Initiated by Cllr Linda Kelly and Martin Sugarman and donated by an anonymous benefactor and the Reuben Foundation.

The Hackney Gazette give the unveiling date as 25th but we believe Boris Johnson unveiled the free-standing plaque on the 23rd, and that it was erected on the building on the 25th. The creation of this memorial was a sensitive topic as indicated by this news item in Ynetnews.

This recently refurbished building, mainly residential, is known as Arthaus.  It is owned by an Israeli developer, Assaf Laznik, who also owns the gallery on the ground floor.   Apart from the Israeli connection there seems little reason why this plaque is on this particular building.  All we can find is a quote from Sugarman: "We wanted it as near to the Olympic village as possible."    Richard Millett's Blog carries a full report of the unveiling.

2013: just to the left of our picture a wonderful shop/cafe opened on new premises: Unpackaged.  Take your own bags and come away with great food and the satisfaction of having done the right thing by the planet. (We should declare an interest -we're good friends.)

This section lists the subjects commemorated on the memorial on this page:
Munich Olympics 40 years

Early on the morning of 5th September 1972 eight members of Black September, ...

Weightlifter. Born in either Prokopyevsk, Russia or Poland, he moved to Israe...

Wrestling coach. Born Yosef (or Yossef) Gutfreund in Romania. He was part of ...

This section lists the subjects who helped to create/erect the memorial on this page:
Munich Olympics 40 years

Their website: "Contributing to the Advancement of Healthcare &amp; Education...

Holocaust survivor and British Olympian (1956 and 1960) who knew the murdered...

Elected Mayor of London in 2008.  Born in New York City, but his family retur...

Past speaker of Hackney and co-chair of the Britain and Israel Olympic Plaque...

MP and Secretary of State for Communities and Local Government.

In May 2017 a small exhibition at City University displayed a copy of a photo...