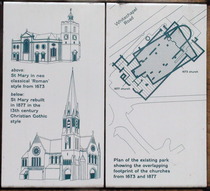 1250-1286: The first church was built on this site as a chapel of ease (meaning not the main parish church) in the parish of Stepney.  The ‘White Chapel’ was constructed from Kentish chalk rubble and the distinctive appearance gave its name to the area. 1329: The original chapel was rebuilt as St Mary Matfelon.  The parish of St. Mary's Whitechapel was created in 1673 when this church was rebuilt in red brick in a neo-classical ‘Roman’ style.

Middlesex Heraldry has pictures of the church in 1860 before the Victorian rebuild and in 1894, after.  The dates on the fountain mean that the "old church railing" from which the drinking fountain was removed is the railing we can see in the 1860 picture.  Annoying that we can't also see the drinking fountain itself.

We learn at Bethnal Green War Memorials that this church's metal WW1 memorial was rescued and is now housed in The Bishopsgate Institute Library.

'Matfelon' is a type of thistle but here is probably a corruption of the Hebrew word Matfel, indicating the Virgin Mary.

Our picture is a photo of an information board in the garden, showing the two footprints.

This section lists the memorials where the subject on this page is commemorated:
St Mary Matfelon Whitechapel

A Grade II listed building designed in the Byzantine Revival style by Robert ...

Monks were first brought to Westminster in about 960 AD by St Dunstan, then B...