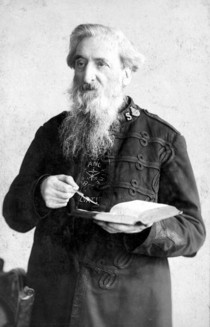 Founded the Salvation Army. Born Nottingham. Came to London in 1849 to find better paid work and became a travelling lay preacher for the Methodists. Married Catherine Mumford in 1855. With his wife's support he became an independent revivalist.

Booth initially held outdoor meetings outside the Blind Beggar pub (still there, just to the west of the William Booth bust) and the Vine Tavern (now gone, this was just a little to the east). His first meeting under cover, actually in a tent, was held, very close by, on the Mile End Waste, on 2 July 1865 and this is considered the start of the Salvation Army. As the winter approached the meetings were moved inside to the Assembly Rooms in New Road.

This was the start of their Christian Mission in Whitechapel. From the idea of it being a volunteer army the name was changed in 1878 to the Salvation Army. From this came the uniforms and military titles and thus a very successful 'brand' was created.

Social work linked with an basic, evangelical Christian religion. His wife was very influential and held a powerful position, as did many women in the organisation. William was not a good administrator but his son, Bramwell, was, and he too was a force in the organisation. Both William and Bramwell worked closely with W. T. Stead making good use of his publicity skills in their social reform efforts. Died at home in Hadley Wood. Bramwell succeeded him as General of the Army.

This section lists the memorials where the subject on this page is commemorated:
William Booth

{On the plaque attached to the front of the plinth:} Here, in East London, Ca...

A chapel was first built here soon after 1348 by Walter de Manny, alongside a...