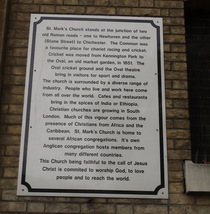 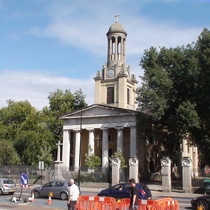 {4 information boards attached to the north side of the church:}

St Mark’s Church stands at the junction of two old Roman roads – one to Newhaven and the other (Stane Street) to Chichester.  The Common was a favourite place for chariot racing and cricket.  Cricket was moved from Kennington Park to the Oval, an old market garden, in 1851. …

Before St Mark’s was built this site was all part of Kennington Common.  For six months in the year this was grazing ground for hundreds of cattle and sheep.  Until 1799 this was also the site of a public gallows.  In 1746 twenty one members of the Jacobite Rebellion, captured at Culloden Moor, were executed here.  Many famous preachers came here.  The evangelist, George Whitefield was here twice in 1739.  In the same year John Wesley preached on the common to an estimated 50,000 people.  Fifty years later one of the first ‘black’ preachers, the radical Robert Wedderburn, born to a West African slave woman in Jamaica, spoke on this site.  This tradition of preaching on Kennington Common was continued in the 1840s by a young pawnbroker’s assistant on Kennington Park Road, William Booth.  He and his wife Catherine went on to found the Salvation Army.

The great Reform Act of 1831 brought direct representation to Parliament for the first time.  Lambeth became a parliamentary constituency on 7 June 1832.  Voting in elections took place on Kennington Common.  The franchise was still limited to property-owning men and the country was seething with political agitation.  The Chartists (‘Peace and Order is our motto’) described themselves as ‘pining in misery, want and starvation.’  They held their mass demonstration on the Common on 10 April 1848.  Asking for fair wages and other human rights, the heavily policed event passed off peacefully.  However the Establishment, including the then vicar of St Mark’s was frightened.  The Park was enclosed.  Run by the ‘Royals’ – the Prince of Wales having given £200 towards the £1000 needed for fencing – the park passed into the hands of what became the London County Council in 1887.  In the meantime, only the Temperance Society was allowed to hold public meetings there.

St Mark’s Church took two years to build and was opened by the Archbishop of Canterbury on June 30th 1824.  One of the Waterloo churches, the cost of £15,274, was paid by a government grant in gratitude for the defeat of Napoleon.  Between 1879 and 1889 the vicar was the historian H. H. Montgomery, father of Field Marshal Montgomery of Alamein.  At that time there were 16,000 people in the parish.  It was staffed by the vicar, three curates and 250 church workers.  1,500 children were taught in the Sunday Schools by 125 teachers.  The church was restored in 1931 at which time the glass dome was installed.  Bombed in September 1940, it was scheduled for demolition.  However, Wallace Bird, a man of vision and faith, became vicar in 1947.  The building was partially re-opened in 1949 and fully opened on 12th March 1960.  Today this church is used for worship and mission by hundreds of Christians each year.

The 1745 Association (who ought to know) writes: "The plaque on the side of the church says it was twenty-one but that may not be quite accurate. It also states that the prisoners were all captured at Culloden and this is certainly not the case."  We've connected to this page all the Jacobites that we believe were executed here.

The church's website has a good history page with more information.  The church was built in 1824.  Oval History has a photo of the ruins left by WW2 bombing.

The section of the common now occupied by tennis courts and a football pitch were added following slum clearance in 1921.  The section, to the SE of St Agnes Place is known as the Extension, added in 1970s.

This section lists the subjects commemorated on the memorial on this page:
St Marks, Kennington - history

Following the defeat of Napoleon at the Battle of Waterloo a Commission was s...

Chartism was a working-class movement for political reform in Britain, which ...

This section lists the other memorials at the same location as the memorial on this page:
St Marks, Kennington - history