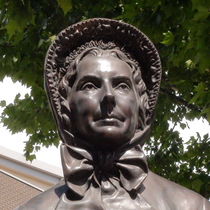 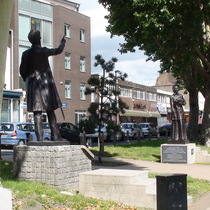 {On a plaque attached to the side of the plinth:}
Donated by the women of the Salvation Army in the United States of America

{On the back of the base of the statue:}
Geo. Wade, Sculptor

When we first visited in 2014 William's statue was looking very pale - showing its fibreglass material. In 2017 it had been re-bronzed and was looking good. Only in the base, where the bronze covering had been scraped, could you see the underlying whiteness. We gave Catherine's statue a rap with our knuckles and that also sounded non-metallic.

These are both copies of the statues erected in 1929 in Denmark Hill. From Victorian Web: "matching pair of monuments ... in front of the William Booth Memorial Training College, Champion Park, Denmark Hill, London SE5. Both figures are shown during prayer meetings in their Salvation Army uniforms. Catherine Booth wears the famous Salvation Army bonnet and holds a Bible to her heart while preaching earnestly."

This section lists the subjects commemorated on the memorial on this page:
Catherine Booth statue - Mile End

This section lists the subjects who helped to create/erect the memorial on this page:
Catherine Booth statue - Mile End

Commissioner  in the Salvation Army in 2015.

Commissioner  in the Salvation Army in 2015.

This section lists the other memorials at the same location as the memorial on this page:
Catherine Booth statue - Mile End

This is a fibreglass copy of the statue on Denmark Hill.