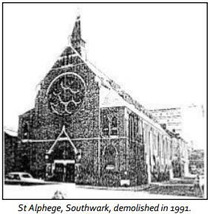 In 1880 the church of St Alphege was built on the eastern corner of the junction of Lancaster Street and King James Street. It was dedicated in 1882. Post WW2 it went into decline and was declared redundant in 1983. In 1986 the interior of the church was used to film a TV episode of Only Fools and Horses. Demolished in 1991.

The congregation moved to the old church's hall nearby in King's Bench Street, where, 2015, it continues to worship. This hall also has a frontage in Rushworth Street, number 50, which is clearly of c.1930 in design but the King's Bench Street elevation is earlier. The buildings to the north of the hall are the former clergy house, now the oratory and rented out flats. From Edith's Streets we think this double-fronted hall was designed in 1910 by William Bucknall.

2022: We were pleased to receive some additional information about the old church hall from Trevor Warr: "I thought you might be interested to know that the upper floor of the old church hall was a photographic studio in the 1970s. It was run by a photographer called Roy Wales and I worked there for several years. We entered our studio from the other side (Rushworth Street). The interior layout for the floor we were on was quite odd with differing levels, a stage and a tunnel that ran under the floor to two small rooms at the end. It was quite low and you had to duck to walk along it. I have no idea what purpose it served. The ground floor was still for church use and, apparently was a British Kitchen during WW2 to help feed those who had lost their homes due to the bombing. The building next door, to the west, was a convent at the time. The current occupiers of the hall from the Rushworth St. side are a film and theatre costumiers. The building on the King's Bench Street front is named the Modern House."

This section lists the memorials where the subject on this page is commemorated:
St Alphege, Southwark