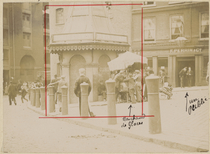 A tunnel beneath the Thames with entrances at Tower Hill and at Vine Lane on the south side. The second tunnel under the Thames (the first being Brunel's) and the first tunnel anywhere built using the Greathead shield. Rails were laid in the tunnel and for a few months in 1870 a passenger carriage was pulled back and forth under the Thames. This business failed and the tunnel was converted for use as a pedestrian toll tunnel. This operated successfully but the toll-free Tower Bridge opening in 1894 took most of the tunnel's customers and it closed in 1898.

Nowadays the tunnel is used by various utilities. The southern entrance was demolished in the 1990s and replaced with a dull blue and white flat-roofed hut. Subterranean Britannica has images of the entrances at various times, but uncaptioned. The Getty image that we've used shows a very decorative building (probably the original), bricked up so presumably post-1898. The boards around the top read 'Tower Subway' and the hand-painted writing onthe bricks reads 'Closed'. Given the slope of the ground this must show the northern entrance.

This section lists the memorials where the subject on this page is commemorated:
Tower subway

The fore-runner of the London Underground system. The London Electric Railwa...

One of the three ships which sailed in 1606 to found the Jamestown Settlement...