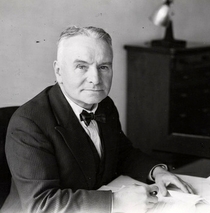 Architect. He designed a number of stations on the London Underground system, including the stations on the Edgware extension of the Northern Line, as well as train depots and bus and trolleybus garages for London Transport.

Apart from the information shown on his Wikipedia page, we know that Stanley Arthur Heaps was born on 17 May 1880, the youngest of the six children of Edward John Heaps (1843-1913) and Mary Ann Heaps née White (1841-1895). His birth was registered in the 2nd quarter of 1880 in the Islington registration district.

On 27 April 1892 he was, together with an elder brother, Henry Herbert George Heaps, jointly baptised at Christ Church, Forest Hill, Surrey, where the baptismal records show that the family were living in Stanstead Road, Forest Hill, and that his father was recorded as a gentleman. Electoral registers in 1906 show that he was renting the front bedroom on the 2nd floor of 235 Stanstead Road, Forest Hill, from his father at 7 shillings & 6 pence per week, but this was reduced to 5 shillings per week in 1907.

They had two children, Eric Stanley Heaps (1910-1985) who would serve as a Major in the Royal Armoured Corps during World War Two, being awarded a Military Cross, and Denis Arthur Heaps (1917-1990) who served as a Leading Signalman in the Royal Navy during the war and was awarded a Distinguished Service Medal.

Post Office London Directories in 1915 and 1920 show him as an architect at 17 Palmer Street, Westminster. Kelly's Surrey Directory in 1918 shows him residing at 23 Dornton Road, Croydon, Surrey.

On 23 October 1919 he was initiated as a Freemason in the Croham Hurst Lodge No.3968, that met at the Club House, Croham Hurst Golf Course, Croham Road, South Croydon, Surrey, giving his occupation as an architect living in Croydon.

He departed from Liverpool, Lancashire, on 19 August 1932 as a passenger on the MV Shropshire for Marseilles.  On 15 September 1933 he left Southampton, Hampshire, bound for Geona, Italy, on the 'Christiaan Huygens' of the Nederland Line Royal Dutch Mail and returned to the Port of London on board the MV Gloucestershire of the Bibby Line on 1 October 1933 having embarked at Marseilles

On 17 August 1934 he again departed from Southampton on board the 'Christiaan Huygens' of the Nederland Line Royal Dutch Mail for Ports Said, Egypt. All manifests show him as an architect residing at 23 Dornton Road, Croydon. He returned on 14 September 1934 arriving in the Port of London aboard the 'Carthage' of the Peninsula and Orient Steam Navigation Company Ltd line having embarked as a passenger at Port Said, giving his address as 55 Broadway, London, SW1.

On 2 September 1935 he arrived in the Port of London aboard the MV Worcestershire of the Bibby Line having embarked in Marseille. On 28 August 1936 he left Liverpool, as a passenger on the MV Derbyshire of the Biiby Line, bound for Marseilles and on 16 September 1936 he landed at Southampton having travelled from Genoa on the 'Marnix Van Sint Aldegonde' of the Nv Stv Mij Nederland shipping line. He gave his address on all manifests as 15 Chichester Road, Croydon.

Telephone directories from 1951 list him 16 Whitethorn Gardens, East Croydon. Probate records confirm this as his home address and that he died, aged 82 years, on 25 May 1962 at Arundel Lodge, Duppas Road, Croydon. Probate was granted to his son, Denis Arthur Heaps, a chartered quantity surveyor, on 16 September 1962 and his estate totalled £7,967-17s-9d.

This section lists the memorials where the subject on this page is commemorated:
Stanley Arthur Heaps

Modernist architect. We can find no information about him and no image, so fo...