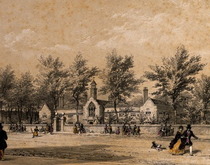 The almshouses were on the area west of Newington Butts and south of St George’s Road, now occupied by the Tabernacle and an anonymous office block to the north. Erected in two phases: firstly St. Peter's Hospital was built by the company in 1615–18; the other, which provided for 20 poor people, was funded by Hulbert in 1719. All demolished in 1851 when their occupants were moved to newly constructed buildings in East Hill, Wandsworth. Here they stayed until 1923 when that site was sold to LCC to build flats. The almshouses then moved out to Bray where there were other Fishmonger Almshouses. The LCC flats were replaced in 1978.

The peregrinations of the Hulbert statue shadow the movements of these almshouses. And the whole story reminds us of the Whittington statue, though that is much more complex.

From History on-line 1878: "Hulbert's Almshouses were erected on a piece of ground belonging to the Fishmongers' Company, lying on the south side of St. Peter's Hospital. It was a neat and imposing little pile, consisting of three courts with gardens behind, together with a dining-hall and chapel, and a statue of the founder on a pedestal in the centre of the enclosure."

This section lists the memorials where the subject on this page is commemorated:
St Peter's Hospital / Fishmongers Almshouses

Activist and community leader. Born in St Catherine, Jamaica, and moved to Br...

The Quakers list a Henry Sterry born 1803 in the parish of St George the Mart...