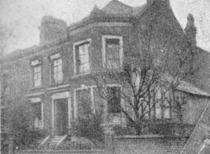 The Hackney Society says: 'Brent House, at 27-9 Devonshire Road (now Brenthouse Road) … was the Salvation Army’s first receiving home in Hackney. It opened in 1889 and was described as "a home for hitherto well-conducted young women who have been led astray, and are about to become mothers." The first girl to be admitted was 14-year-old Mary Ann Elliott, “made pregnant by her brother”.' More information at Lost Hospitals of London, which says “Brent House closed in 1926, when services transferred to Hope Lodge in Upper Clapton.”

This section lists the memorials where the subject on this page is commemorated:
Brent House Salvation Army maternity home

Founded as part of the legacy of Anne, Lady Dacre. Originally it was an almsh...

From the Picture source website: "Turning Point is a social enterprise, focus...